The ancient site of Dura-Europos is situated on the western bank of the Euphrates river, not far from the village of Salihiyah in modern Syria. First called “Europos”, the Hellenistic Seleucid Empire founded the city around 300 BCE. Later, it was controlled successively by the Parthian Empire (2nd century BCE-later second century CE), and the Roman Empire (from the later second century CE), and known to inhabitants as “Dura” (the fortress) thanks to its role in frontier defense. The hyphenated name is a modern construct that reflects the city’s historical and cultural complexity.

In the 250s CE, the site was threatened by a series of Sasanian Persian campaigns. Attempting to shore-up the city’s defences in advance of attack, Roman soldiers garrisoned at Dura constructed a massive earthen embankment to reinforce the vulnerable western wall.  In a move that would prove fateful for the site’s exceptional archaeological preservation, buildings in the vicinity of the west wall–including a Christian church, a Jewish synagogue, and various pagan temples that attest to the city’s ethinic and cultural diversity–were requisitioned and filled with earth and debris. What was at the time a highly destructive process, in fact created (together with the hot, dry climate) the conditions for the site’s extraordinary degree of preservation.

Thanks to these highly unique circumstances, large sections of rare mural painting, and hundreds of objects made from organic materials survive at Dura-Europos. For this reason, the site provides unparalleled glimpses into the multicultural, religiously diverse frontier life, and the running of a military garrison with coexisting soldiers and civilians.

Yale is home to one of the largest collections of Dura-Europos objects, around 15,000 artifacts. This is thanks to its role in the early excavations at the site (1928-1937) and the practice of ‘partage’ that was current among archaeological collaborators in the early 20th century.

Learn more about the history of Dura-Europos and Yale’s role in its excavation here: 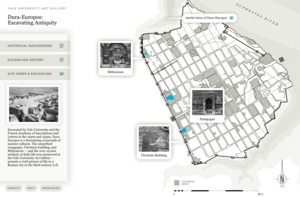